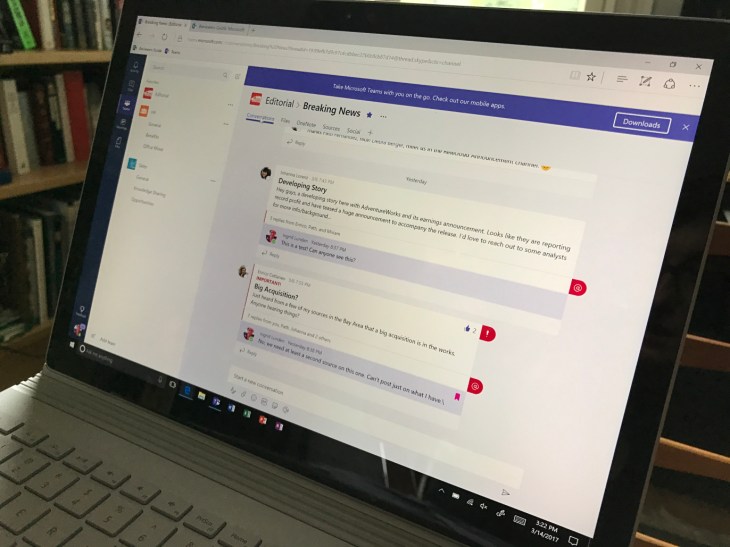 Microsoft opened up the news floodgates this morning, in the kick off to its annual Inspire event in Vegas. One of the more compelling announcements of the bunch is the addition of a free version of Teams.

The Slack competitor has been kicking around in some form or other since late-2016, but the $60 a year fee has likely made it a bit of a nonstarter for smaller businesses. After all, it’s Slack’s free tier that helped the work chat app gain so much traction so quickly. A free version makes a lot of sense for Microsoft.

Signing users up for Teams is way to get more feet into the door of its application ecosystem, which was once ubiquitous in offices. Once they’ve download teams, workplaces will be hooked into the Microsoft 365 suite.

The free tier actually brings a fair bit of the app to up to 300 people per workplace. Here’s the full rundown of features per Microsoft,

The company’s done a good job hooking in enterprise customers, but as it notes, SMBs constitute 90+ percent of businesses globally, so that’s a whole lot more devices to tap into. The free tier is available in 40 languages starting today.

Realme 6i Surfaces on FCC, Tipped to Pack 5,000mAh Battery and more

Apple AirTags is Completely Waterproof and will use Magnetic Charging

ICVSTECH - February 26, 2020
0
Honor launched a ton of new consumer products at its All-Synario Intelligence conference, and one of them is the company's latest true wireless earbuds - the Honor Magic earbuds. Honor says that its new wireless earbuds offer impressive noise isolation, thanks to proprietary hybrid active noise-canceling technology. The Honor...