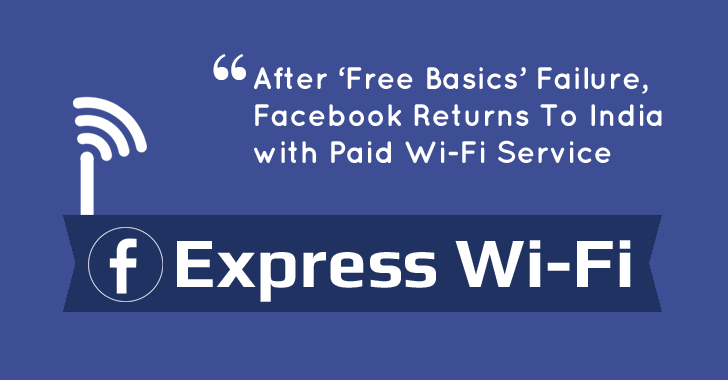 After testing it for over a year, Facebook announced the commercial launch of its Express Wi-Fi service. On Thrusday Express Wi-Fi launched commercially in India. Facebook revealed the service has been in testing since 2015 with various ISPs and is now commercially available via nearly 700 hotspots across four states -where low internet penetration or poor connectivity, the service will now be available including Uttarakhand, Gujarat, Rajasthan and Meghalaya. Services in Uttarakhand, Gujarat, Rajasthan, and Meghalaya are currently enabled by AirJaldi, Tikona, LMES, and Shaildhar ISPs, respectively.

Facebook has partnered with Bharti Airtel to launch an additional 20,000 public hotspots over the course of next few months.

With today’s launch anyone can access the Express Wi-Fi network by signing up with an Express Wi-Fi retailer. There are daily, weekly or monthly data packs available at a rate set by Facebook’s partners. These physical and onlinevouchers are priced at Rs 10-20 for a day and go up to Rs 200-300 for a month. After signing up, one will be able to then connect to the Express Wi-Fi hotspot, register/create an account, login and start browsing or use any app.

Interestingly, Facebook’s partnership with Airtel is likely to be seen as a threat to the current market position Reliance Jio enjoys. It is unclear if Reliance Jio will be one of the future operator partners for Express Wi-Fi. It appears Airtel will be benefiting from the service for some time.