Record or stream games and other software from your desktop

With a free screen recorder, it’s easy to capture and share footage straight from your desktop. Fancy showing other people how to play big name games on YouTube? Would you like to make demos to show off your apps, or to teach others how to use specific software? We’ve got the tool for you.

The simplest screen recorders simply capture what’s on your screen and save it in AVI format, but the more advanced free tools also offer editing, picture-in-picture, live streaming, and gameplay optimization.

However, you have to be careful – many free recorders will add unsightly watermarks to your clips or let you record only a handful of videos before demanding payment, so it’s essential to pick the right software first to avoid disappointing results.

Here’s our pick of the best free screen recorders that will help you record or stream professional-quality video from your desktop or webcam. 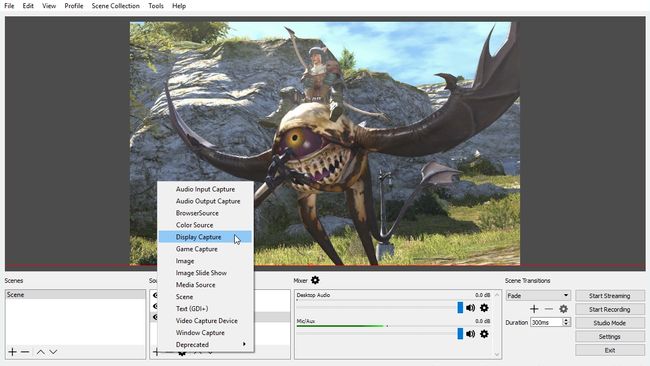 The best free screen recorder for capturing or streaming games, packed with features to help you achieve high-quality recordings

If you’re a keen gamer, OBS Studio is easily the best screen capture software for you. Unlike the hugely popular FRAPS (which only lets you record for 30 seconds at a stretch unless you’ve bought a license, and applies a watermark to the resulting footage), OBS Studio is open source, and completely free to use without restrictions.

Free screen recorder OBS Studio supports both streaming and recording in high definition, with no restrictions on the number or length of your creations. You can stream live to Twitch or YouTube gaming, save projects and come back to them later, or encode your footage in FLV format and save it locally.

Because OBS Studio can record directly from your graphics card, it’s able to capture games running in full-screen mode (many other screen recorders can only record if the game is windowed), with customizable hotkeys to control the recording. OBS Studio can also make full use of multi-core CPUs for improved performance, and can record at 60FPS (or even higher).

It might take a little while to set it up exactly how you want, but OBS Studio is by far the best and most powerful screen recorder for gamers. 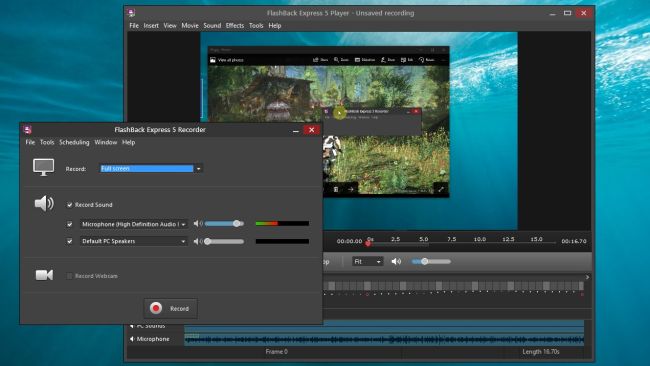 OBS Studio is our top choice for recording from a desktop or webcam, but Flashback Express comes an extremely close second. Despite being a free version of a paid program, FlashBack Express won’t put ugly watermarks over your recordings or impose time limits, and it’s packed with features and tools that rival many premium programs. Its interface is less intimidating than OBS Studio, so if you’ve never used a screen recorder before, it’s an excellent choice.

You can record from your whole screen, a window, a selected area, or a webcam. Once you’ve finished, your recording will appear in a simple editor, where you can crop and trim it to suit your needs, then export it to YouTube, an FTP server, or your PC.

That’s all fairly standard fare for a free screen recorder, but take a minute to dive into Flashback’s advanced options and you’ll find a wealth of thoughtfully designed settings that will make your desktop recordings look truly professional. The recorder can automatically obscure passwords entered on screen, replace your silly wallpaper with a plain one, hide messy desktop icons, and highlight your mouse pointer to make it easier to follow. There’s also a dedicated gaming mode that lets you define the number of frames recorded per second.

There’s no limit on the length of your recordings unless you choose to set one, which can be useful if there’s a chance you might accidentally leave the recorder running. You can also choose to break long recordings up into chunks – a brilliant touch that helps you avoid creating huge, unwieldy files. Your recordings won’t be watermarked, either. 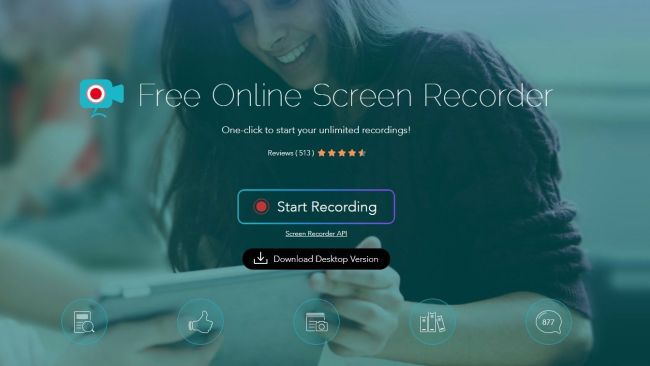 An in-browser recorder more powerful than most desktop apps

If you want to record a presentation, software demonstration or tutorial, give Apowersoft Free Online Screen Recorder a try. It’s a browser-based tool, which means it’s not suitable for games, but for any other tasks it’s ideal.

The first time you use Apowersoft Free Online Screen Recorder, you’ll be prompted to download a small launcher application. You’ll then be provided with a control bar packed with more options than you’ll find in most desktop screen recording software. You can capture footage from your desktop or a webcam, and record audio from your PC, microphone, both or neither.

You can record the whole screen, select an area manually or choose one of the preset resolutions – ideal if you’re recording a clip for YouTube, for example, and don’t want to use a separate video editor to resize it later.

Apowersoft Free Online Screen Recorder also offers customizable keyboard shortcuts for speed and convenience. You can choose whether or not to include the cursor in the recording and take your pick from a range of output formats including MP4, WMV, AVI, MOV and many more. You can even add annotations during the recording.

Once you’re done, you can save the recording as a video file or GIF, upload it directly to YouTube or Vimeo, or send it to Google Drive or Dropbox. You can also edit the clip. Selecting this option will download an additional component – Apowersoft Video Editor – which lets you make simple adjustments before exporting your video in your preferred format. A truly exceptional tool.

Note that the ‘Download desktop version’ button links to a program called Apowersoft Screen Recorder Pro. This is a trial version of a premium application, and is more limited than Online Screen Recorder. 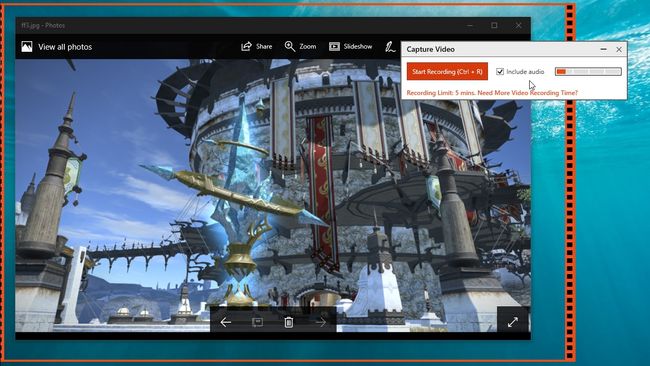 TinyTake is a free screen recorder designed to grab webcam and desktop footage – not in-game action. Starting a recording is simple – just click the button, then select an areas of the screen and tap [Ctrl]+[R].

Your recordings won’t be watermarked, but you’re limited to five minutes of footage at a time. That might not sound like much compared with some of the free screen recorders here, but it’s plenty for an average YouTube video tutorial.

Once you’re done, you can preview your video and export it to your hard drive, to YouTube, or to TinyTake’s own cloud storage service, which gives you 2GB for your clips.

Other tools, including annotations, are exclusive to the premium versions of TinyTake, which are designed for commercial use.

TinyTake is a lean, streamlined screen recorder, but the lack of editing tools is a shame, and places it below Apowersoft Free Online Screen Recorder in our ranking. 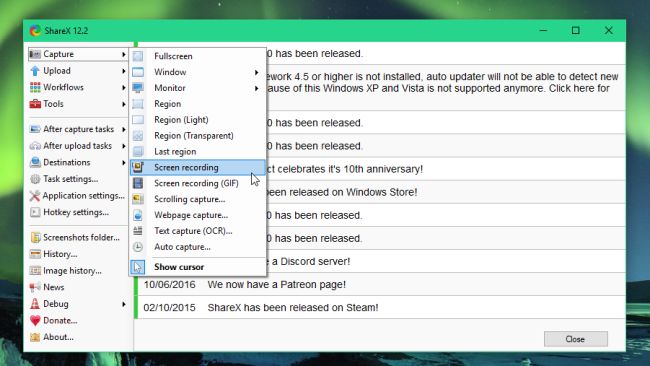 ShareX is an open source app for capturing still screen grabs and recording videos. There are no watermarks or time limits to worry about, but the interface isn’t the most intuitive in the world so you’ll be best off using keyboard shortcuts. For quick reference, you can start a recording by tapping Shift + Print Screen, and stop it again using Ctrl + Shift + Print Screen.

You can also use this free screen recorder to save your capture as a GIF rather than a video file, which can be extremely useful for sharing on forums and social media.

Not only is ShareX a brilliant free screen recorder, it can also capture an entire scrolling webpage, capture and identify text via OCR, and even capture your screen according to a schedule.

Another of its best features is the ability to send your captured grabs and videos straight to a file-sharing or social media site. There’s a vast array of options, which you can check out on the project’s site.

Unfortunately, ShareX doesn’t support taking screen grabs or recordings from games running in full-screen mode. Other than that, it’s a superb screen recorder that will serve you extremely well.